This map shows a thriving town site.  The only problem was that it was a complete fiction.  The real Ionia, Michigan, Seat of Ionia County, had been placed two miles west of this site in 1833.

At the time the map was made in 1835, half of the square-mile section had been purchased by Chicago-based land speculator Nathaniel Brown.  The other half was still owned by the Federal Government.  Brown had the idea of a sawmill anchoring a community that in time could steal the County Seat from nearby Ionia Center.  Although some lots were sold, the venture came to nothing.

The map carefully details the true physical features of section 21 of current day Ionia Township, however the town lots, the mill race and the mill pond only existed in the mind of the owner.   Numerous lots have been color coded to some unknown system, and dots suggest houses built.

Land speculation, the buying and re-selling of land, served both legitimate and illegitimate purposes in the wild west days of Michigan’s history.  Much money could be made on cheap land, if only one could successfully promote a town site and convince people to move there.

About forty years later a small community called Prairie Creek was platted on the north-west corner of the site which is today surrounded by an enlarged City of Ionia.

This map was a gift from Ronald Dietz. 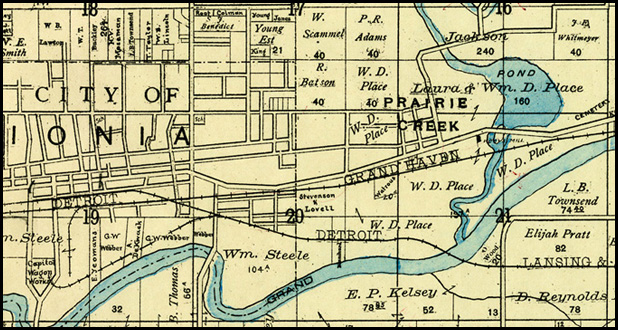 Excerpt from a 1891 plat map of the area between the City of Ionia and the site of the failed settlement.